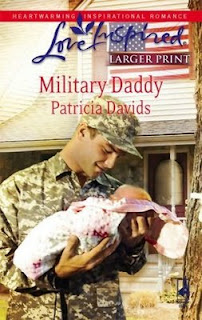 
Patricia Davids' Military Daddy might be found on book shelves that say "romance" or "Christian", and both would be true, but while some authors present these genres as overly cheesy, Ms. Davids created a Christian romance novel with characters who could be everone's neighbors. Normal people who make mistakes, who aren't flawless, but who try to do the right thing.
Annie, the recovering alcoholic (and yes, alcoholism can be found in all neighborhoods, if in varying degrees), first met Shane, a Corporal with the Army, in the night she relapsed. Not long after, she realizes she is pregnant and, after some pondering, decides he has a right to know, even though she doesn't want anything to do with him. She thinks having him in her life and her baby's would be a bad decision as she compares him with her many former boyfriends, from her drinking years. When Shane hears about his baby, he is at first shocked and surprised, but he soon realizes that he wants to be there for his son or daughter, to not have the child experience the solitude he had to endure as a child. But how can he persuade Annie that he is nothing like her former boyfriends and really wants to stay when he already knows he'll be transferred to Germany in a few weeks?
Davids' created characters that are in general likeable, but also show that life is not always easy and that both dedication and belief can help getting through difficult situations. When Shane hears about Annie's pregnancy, he is at first not happy about it, as he knows he'll be leaving, but once he made up his mind, he tries everything to be with her and to help her, even though she at first tries to keep him away. He is lucky he has Marge, Annie's friend, landlord and saviour, as well as Marge's daughter Olivia, on his side. They both help him understand Annie better and to be closer to her. Yet, that is not the only reason Marge and Olivia are this present. With Olivia, we see how Annie's life as an alcoholic might have started. And Marge is Annie's saviour, not only when she was in bad condition, but also when she tried to push away Shane. She helps Shane stay close to the house and therefore to Annie by inviting him for dinner and letting him help with some repairs on the house.
Davids clearly shows the problems and misunderstandings the main characters have to deal with at first, before they finally find a way to be together. While the slowly developing love story between Annie and Shane is the main focus on the book, the author also shows glimpses of how alcoholism effects those that suffer from it and their families, not only through Annie's story and Olivia, but also through an AA meeting.
This book was both entertaining and insightful with the characters showing both good and bad sides. I might not be a fan of the everlasting "hunk falling in love with the girl next door" (how realistic is that, anyway?), but unlike other authors that keep mentioning how good-looking the male character is, this was not the case with Military Daddy.
While I'm no particular fan of Christian fiction, I will pick up the next book, hoping it will be about Avery, as I am really curious to get to know him better...

Edit to add (from now on ETA):
Oops, I completely forgot my rating *blushes* Here we go: