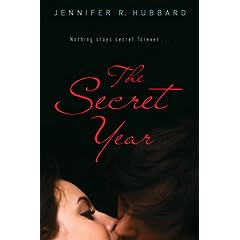 Julia and Colt have been secretly seeing each other for a year when Julia dies in a car accident. She is from the Black Mountains, the rich part of town where country club parties are a regular event, while helives in the flats and it is an unusual thing that his brother even attends university. Keeping their relationship a secret - even from Julia's boyfriend - at first was not problem, but when she is dead, he can't even mourn her openly. When he receives Julia's journal made up in letters for him, he relives their year together while simultaneously trying to Especially now that he feels he played a part in her death?

What a debut! Jennifer R. Hubbard created a male lead character I could feel for. His pain, his grief practically jumped out of the pages while reading. While everyone, Julia's friends, her family, her boyfriend Austin, is allowed to openly grieve, Colt can't show his feelings, his loss, so it is all restricted to his thoughts and, to a part that is only visible to the reader, to his actions. He was was head over heels in love with Julia, so losing her shook his world as nothing else in his life did.

Hubbard begins to tell the story of a couple no one would be able to picture together with Colt finding out Julia is dead. He gets a phone call from a good friend, Syd, and from then on, we get to see his feelings, the emotional roller coaster he is in. From the beginning, is thoughts, feelings and actions are visible to us, Colt grew on me throughout the book and I was so very sad to see him go as I closed the book after reading the last page.

With Julia, it was quite different. At first, she is a likeable character, one we only get to know through Colt's eyes, and later through the letters to him she wrote in her personal diary (which she never intended to show Colt). It seems she is overwhelmed with the expectations everyone has for her, her family, her friends, her boyfriend, and maybe even society. She is, after all, the daughter of rich parents, she has to be perfect.

After a while, though, Julia's actions and her behavior seemed a lot like that of a spoiled brat. She might not mind getting somewhat dirty, but only when she wants to. Everything has to go her way, her meetings with Colt (whenever she wants it), them ignoring each other throughout the day when they're at school. It's her way or no way, which is even visible in her diary.

I can't wait to see more of Jennifer R. Hubbard's books on Mt. TBR. And I hope it will be sooner, rather than later.